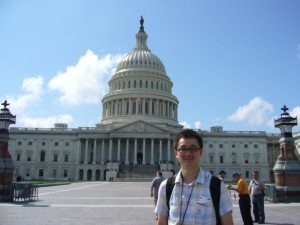 My current research is focused on developing solid-state electrochemical sensors with selective detection of an ambient gas. We are trying to use different semiconducting metal oxides (SnO2, ZnO, WO3 and CuO) thin films and nanostructured materials (carbon nanotubes, graphene) to fabricate highly sensitive gas sensors. Sensitivity/selectivity to a particular gas depends on the intrinsic properties of the material, and can be modulated by doping to alter the electrical properties or by introducing catalysts such as Au, Pt, Pd to alter the chemical properties. Issues of compatibility with the environment, interference effect with other gases need to be resolved before practical applications. Many strategies have been reported to reduce interferences, including the use catalysts, and adsorptive or catalytic filters. We developed a novel approach to discriminate among volatile compounds using a semiconductor heterojunction structure (Figure 1). If the p-type and n-type semiconductors shows reverse conductivity changes in response to test gases due to the opposite charge carriers, the combination of a p-n array can be used to reduce the resistance change, and thereby signal from specific analyte species. 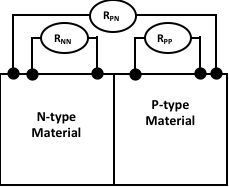 Schematic diagram of a p-n junction device structure. RNN, RPP and RPN are the resistances measured between n-n, p-p and p-n regions.