The collection and testing of natural water samples has been an ongoing project at OSU involving hundreds of students, the majority of whom are enrolled in Analytical Chemistry courses like Quantitative Analysis.  By bringing together many student projects into an Overall Water Data Set it is possible to identify trends on a significant scale, both spatially and temporally.  For example, based on samples collected in the Fall of 2009, it is evident that the Olentangy River (the principal river that runs through the center of Columbus, OH) has elevated concentrations of nitrate with respect to the tributaries leading into it (below, left).  In contrast, these tributaries are elevated with respect to chloride (below, right).  These findings suggest that seasonal rural fertilizer contamination up-stream from the city is contributing to the increase in nitrates, whereas it is likely that de-icing efforts within the city are contributing to the chloride contamination. 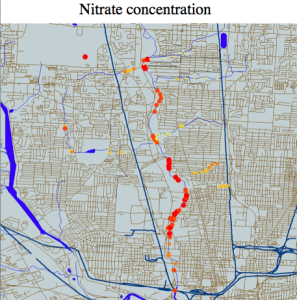 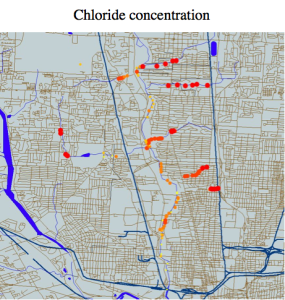 The year-to-year variation in ion concentrations has been quite significant.  For example, when comparing the chloride concentration in both the Olentangy River and its tributaries for Fall 2009 and 2011 it is clear that the 2011 have much more chloride, yet the strong correlation between sodium and chloride  persists.

In addition, a more comprehensive longitudinal investigation is currently in progress.  The aim of this study is to better understanding compositional variability in Columbus’ waterways as a function of season.  This effort, coupled with continued in-class student-led projects, will continue to provide insights into this urban ecosystem.