The presence of metals in aquatic ecosystems is a growing concern as human activity continually has an increased impact on the environment. In the REEL programinvestigations metals such as sodium, potassium, and calcium are determined in natural water samples by ion chromatography.

Anthropogenic Impact:  There are a variety of sources for the numerous metals frequently found in freshwater systems.  As an example consider mercury, one of the most toxic metals, which if exposed to at even small levels can have serious health affects.  Natural sources of mercury include volcanic emissions and forest fires.  Forest fires are estimated to contribute 590-930 metric tons of Hg yearly worldwide.  However, anthropogenic sources, those resulting from human activity, have a much greater fingerprint.  Solid waste incineration and coal and oil combustion account for over ½ of mercury’s total global emissions.  In China, coal contains an average 0.22 mg/kg of mercury, of which roughly 70% is emitted into the environment. In 1995, it was estimated that ½ of all emissions were from Asia.  High levels of other toxic metals such as Cadmium are also in great part due to human activity.  It is estimated that 90% of all Cd pollution is anthropogenic.

Failure to adequately monitor and regulate metal pollution into our waterways can have serious health implications for both people and aquatic wildlife.  Unchecked nitrogen oxide emissions along with industrial plants and vehicle emissions have assisted in the gradual acidification of water ways.  This decreased pH increases dissolved trace metals such as aluminum.  Higher concentrations of aluminum in aquatic ecosystems results in reduced species diversity and the abundance of aquatic life in lakes and streams.  However, people have not fared as well in Japan, where high levels of mercury have led to thousands of cases of mercury poisoning.   In 1991, in Japan, it was reported that there had been 1043 deaths from Minamata Disease in the last two decades.

Uptake of Metals by Fish:  In aquatic ecosystems, fish acquire and store metal via the foods they eat or the water surrounding them.  The transfer of metals via the food chain is referred to as the food chain effect, which is often substantial enough to bring about harmful concentrations in the tissues of fish.  It is also found that fish will absorb the water containing various metal ions through their bodies.  Studies with rainbow trout have shown high concentrations of Cd in the gills after exposure.  The gills then distribute the metal ions throughout the body where they accumulate in specific organs (liver and kidney).  This can have serious implications for aquatic ecosystems.  If certain species are not resistant to specific metals they are at high risk of being killed off.  The reduction of species diversification is a major threat to the well-being of the given ecosystems due to its implications on the food chain.  It is also found that the concentrations of metal within the various fish tissues are greater than that of the water.  This is a main reason why the metal content of fish that are to be sold for human consumption is heavily monitored.

Metal Analysis:  Concentrations of various metals in solutions can be determined using the method of Ion Chromatography. Chromatography is a technique for separation of a mixture based upon differences in affinity of certain ions to a stationary phase.

Below is a list of numerous metals that can be found in various waterways.  Not all are threatening or present to the local waters of the Columbus area.

Potassium exists naturally in multiple minerals, and is dissolved from these minerals by weathering. Groundwater seepage, degradation of plants and animals, and industrial spills 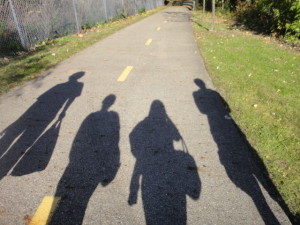 are also the sources of potassium in water. Potassium is a major element in the manufacture certain synthetic fertilizers. Industrial activities, such as the production of glass, increase the potassium level in river.

Sodium is a natural component of river water.  Much of sodium is dissolved from rocks and soils as well as groundwater seepage. Sodium has many different Industrial uses, such as the purification of metals, textiles, fertilizers (sodium nitrate), cleansers (bleach), and the manufacture of soaps. The waste of these applications increases the sodium concentration in river water.    Fresh water (rivers, lakes, streams) is defined as having less than 1,000 ppm of sodium, however freshwater aquatic life can survive in sodium concentration far beyond this values.  Since nearly all sodium salts are readily soluble in water, the real danger comes from the anions of the sodium salts dissolved in water.

Calcium is also a major constituent of coral. In general, rivers contain 1 – 2 ppm calcium, but in areas that contain lime may contain as high as 100 ppm calcium.With the high concentration of calcium found (99.82 ppm) along both rivers, it may be concluded that these rivers run through areas that contain lime.  Calcium is also largely responsible for water hardness, which helps to protect fish from direct metal uptake.

Typical Range: 1-2 ppm in most rivers.  Some lime area rivers may approach 100 ppm.

Other metal ions (i.e. Pb, Cd, Cr, etc., as described below) can be found in water but were not analyzed in this investigation.  These metal deserve mention due to their biological and environmental effects.  These hazardous cations may be found in water primarily due to urban land use.  On-site waste-water treatment systems that fail cause the spill of waste. Along the Olentangy River, factories, highways (e.g. Olentangy River Road Freeway), and residential areas are main sources of these metal pollutants. A good example of this type of metal pollution was documented in the Olentangy River at Galion on July 21, 2003. One night, a major downpour lasted for 15-20 minutes, which caused water to flood several streets. After the rain subsided, a sample of the river was collected that contained: copper of <10 μg/L, cadmium of 0.4 μg/L, and lead of <2 μg/L.  One day later, a second sample was collected and found to contain: copper of 47 μg/L, cadmium of 24.2 μg/L, and lead of 19.1 μg/L (TSD).  This example shows how watershed along roads and highways are an instrumental cause of metal contamination in rivers.

Typical Range: 0.8 ppm – 2 ppm in most rivers. The dissolved form is extremely low due to the stability of Cr(OH)3.

Hazardous Range:  The World Health Organization stated a legal limit of 5 mg Zn2+/L of water.[2]
Sources:  Zinc can get into the water through mining, smelting metals and steel production.  Burning coal and some wastes also contribute.[3]

Typical Range:   The average should be around 4 micrograms per liter of water.[4]

Hazardous Concentration:  “The U.S. Environmental Protection Agency (EPA) has set a guidance level for the USA limiting copper in drinking water to 1.3 mg/L (parts per million). The World Health Organization, an organization that many countries of the world rely upon for health guidance, has established a 2 mg/L copper guidance level.[5]”

Sources:  Generally through copper fixtures and pipes and from additives designed to control algal growth.

Environmental Effects:  Copper does not break down very easily in the environment and can accumulate in plants.[6]  This means that in copper deposits, very few types of plant life can survive the saturation of copper.  Animals are affected to a lesser extent, but grazers such as sheep and cows can become ill from eating grasses heavily concentrated in copper.  Copper also slows down the decomposition of organic matter.

Typical Range: 10 micrograms per liter of water is average.

Hazardous Concentration:  Above 50 micrograms per liter is when nickel becomes hazardous.

Sources:  Leeching from chromium-nickel stainless steel materials is the main cause.

Environmental Effects:  Nickel is not known to accumulate, thus it does not biomagnify up the food chain, but high concentrations can cause cancer to animals that drink from contaminated water.  Plant life is generally unaffected, but some algae are severely reduced.

Typical Range:  Cobalt is not readily dissolved in water as it is only mobilized in rivers and streams that are highly acidic.

Sources:  Most naturally occurring cobalt exists in soils and freshwater sediment.  Cobalt is typically introduced into the environment from mining practices, ore refining, coal combustion.  Radioactive isotopes of cobalt do not occur naturally, but are a byproduct of nuclear power.  However, a nuclear power plant accident releasing mass amount of cobalt in the water table is still considered to be relatively safe.

Environmental Effects:  Cobalt is also not known to be transferred up the food chain, therefore, even high levels of cobalt in waters will only directly affect the plant life and those organisms eating the plants.

Hazardous Levels:  According to the EPA, the maximum tolerable lead (Pb) concentration in water supporting aquatic life is 100 ppb. Above this level, aquatic life forms can suffer ill effects.  Only levels much higher than 100 ppb will actually begin to kill of the aquatic life.  However, even low concentrations of lead are a danger to humans because lead salts and ions containing lead are transferable up the food chain.

Sources:  Much of the total lead pollution in the environment is from the manufacture of electronics and the production of paints.  Old buildings still contain lead paints and lead plumbing components.  And these sources of lead pollution will continue to pollute for quite some time.

Environmental Effects:  Liver failure, brain damage, and death can occur in humans who consume too much lead.  Since lead is not readily eliminated from the body, any amount of lead in bodies of water is dangerous when this water is used to irrigate food crops.

Hazardous levels: Fish are more sensitive to Al than mammals.  Toxic effects at 36ug/L water of Al for fish.  For livestock maximum tolerable level for diet is 1,000 mg/kg.

Sources:  Acidification of soil and water results in increased levels of aluminum.

Environmental Effects:  The dissolved Al can settle at the bottom of lakes, disrupting the phosphorus cycle.  High levels will reduce species diversity and abundance of life in general.

9)   “Water, A shared Responsibility, The United Nations Water Development report 2”, a report by the World Water Assessment Program of UN-Water, produced in 2006.

11)  “Contaminated food and uptake of heavy metals by fish: a review and a proposal for further research” R. Dallinger, F. Prosi, H. Segner, and H. Back.