Water pollution is commonly attributed to harmful heavy-metal ions such as lead or arsenic, yet nitrogen-containing sources of pollution can be harmful to ecosystems as well. Nitrogen-containing pollutants are mainly inorganic forms such as nitrate and ammonium ions and while beneficial in proper concentration an overabundance has detrimental consequences.  When water systems are exposed to unnatural increases in nitrogen, a chain of events with dire affects on surrounding ecosystems can occur. This results in widespread contamination as nitrogen is transferred through streams and rivers throughout the country. For this reason, nitrogen contamination has become an important topic in protecting the environment.

Nitrogen originates from both human and natural sources.  Agriculture is the largest contributor to nitrogen contamination and is responsible for over 80 percent of the nitrogen that is unnaturally added to the environment (Nitrogen, 2011).

The main source of this agricultural contribution is fertilizer. Fertilizers contain high amounts of nitrogen and when used by farmers, it is only partially absorbed by the crops. The surrounding environment is then exposed to the remaining fertilizer, and high levels of nitrogen enter the waterways. This results in a major increase in nitrogen contamination during common times of fertilization (Nitrogen, 2011). The second largest agricultural contributor is animal manure. Animals in restricted pastures produce high levels

This excess nitrogen released into the environment has certain damaging effects. High levels of nitrates can cause a body of water to undergo eutrophication, a process that occurs when there is a large flux of nutrients within the water (EPA, 2011). The increased nutrients speed up algae growths, often leading to large blooms. These large algae blooms deplete the oxygen levels in the water by blocking sunlight to the underwater grasses below or by using the oxygen as the dead algae decomposes. This lack in oxygen leads to the death of fish and other organisms within the body of water. The harmful effects of eutrophication can be easily observed by the green color of the water and a foul smell due to toxins created by the algae blooms (EPA, 2011).  The fragile balance of nitrogen in the environment is made evident by acceptable ranges of this analyte in natural waterways as eutrophication can occur in concentrations greater than 5 ppm (WHO).  While eutrophication occurs naturally as a body of water ages, human activity such as farming with nitrogen-rich fertilizers has greatly sped up the process. The article Nutrients in Groundwaters of the Conterminous United States, 1992-1995 offers a thorough explanation of the correlation between human behaviors and nutrient fluctuation within groundwater sources.

Some ecosystems are able to combat this algae problem by breaking down nitrates to form oxygen. However, the nitrates can easily form other compounds which can cause more damage to the ecosystem. For example one byproduct of this process is ammonia, which can have equally destructive effects as it is extremely toxic to fish. Although these ecosystems are able to counter the effects of excessive algae growth, the excess nitrogen contamination in the water can still have harmful effects on organisms (EPA, 2011). 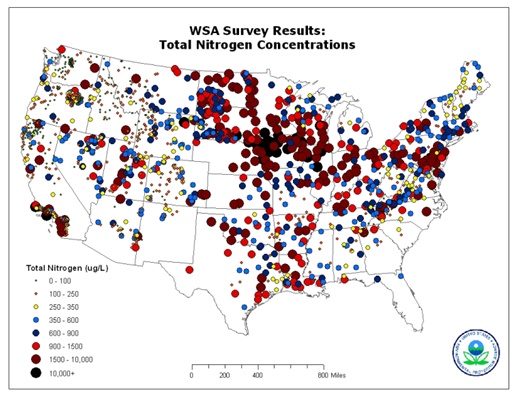 In extreme cases, eutrophication can lead to such severe oxygen depletion that bodies of water can become “dead zones”. These dead zones do not have necessary oxygen levels to support life. Two of the largest dead zones on Earth include parts of Lake Erie and the Gulf of Mexico. These areas are highly susceptible to becoming dead zones because they are the main bodies of water that rivers from the eastern United States run into. Therefore, all of the nitrogen contamination from these areas runs into either the Great Lakes or the Gulf of México (EPA, 2011). Dead zones demonstrate how small areas of contamination can lead to large effects on entire ecosystems. It is for this reason that nitrogen contamination in waterway is very serious and important topic in environmental protection.

Chart Source: USGS; Nonpoint and point sources of nitrogen in major watersheds in the U.S. (Pucket, 1994).