Ion Chromatography:  Ion chromatography (IC) may be used to analyze aqueous samples by separating ions according to their size and charge.  Liquid samples are injected into one of two different columns according to charge, and the ion retention time can be used to calculate the concentration of each ion.  This method is particularly useful since samples are ready to be run as soon as they have been filtered of solid debris (Harris).

Absorption Spectroscopy: There are wide variety of absorption spectroscopy methods, which are used to determine the amount of radiation emitted from a sample.  The instruments measure absorbance, which is expressed in terms of either frequency or wavelength.  The primary two types of spectroscopy depend on the energy levels of the light used:  ultraviolet-visible (UV-Vis) spectroscopy and infrared (IR) spectroscopy.  Specifically, UV-Vis is useful when analyzing liquid samples containing transition metal ions and many organic compounds, while IR can be used to determine ion concentrations in both liquid and gas samples.  Infrared spectroscopy has many practical applications and is commonly used in forensic analysis and to determine blood alcohol levels (Harris).

Luminescence:  Another technique that uses light absorption to measure the concentration of molecules in solution is luminescence, where the target molecules are coupled with a fluorescent compound, thus making them easily identifiable amongst other molecules in solution.  As the signal increases, the concentration of the molecule increases according to a calibration curve.  This technique is commonly used in genetics research as it is can be used to ‘light up’ specific mutated strains of DNA (Harris).

Mass Spectroscopy:  Mass spectroscopy is a technique used to determine the mass of atoms, molecules and fragments of molecules in a sample.  Its main purpose is for analyzing organic samples by ionizing species from condensed forms and separated by their mass-to-charge ratio. This technique can be used to determine the amino acid sequence in a protein or structures of other complex organic molecules (Harris).

Atomic Absorbance and Atomic Fluorescence Spectroscopy:  These two methods of analysis are used to determine singular elements and particles and their concentrations in analytical samples. The samples are atomized by heat, flame, or radiation, then the atoms, ions and particles are measured based on wavelength absorbance and concentrations determined via calibration curves. This method of analysis can be used for determining the composition of liquid and gas samples and applied to determine the metals in various materials such as oils, seawater and agricultural samples (Holler).

Probe analysis: Sample analysis through the probe usage is convenient when samples need to be analyzed in multiple areas.  Ion selective electrodes (ISE) are employed when

Nuclear Magnetic Resonance (NMR) Spectroscopy:  NMR can be used to identify a compound dissolved in solvent based on the composition.  The technique can analyze hydrogen, carbon, fluorine, phosphorous, fluorine and many more nuclei. The nuclei can be analyzed based on position and number of nuclei whose quantum mechanical properties differ when placed in a magnetic field, yielding a spectrum that is analyzed in its entirety. NMR is useful for analyzing samples that are soluble in various solvents, specifically in organic chemistry, biochemistry and biology.

Raman spectroscopy:  Raman spectroscopy can be used to analyze both organic and inorganic compounds in solid, liquid, or gaseous samples.  In this method a laser is shined on the sample and the wavelength of the refracted light is used to determine the molecules present based on vibrational frequency (Holler).  The EPA has discussed the use of Raman spectroscopy for the analysis of potable water. 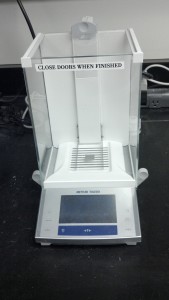 Gas Chromatography:  The use in gas chromatography lies in its ability to analyze the chemical makeup of a gaseous sample.  After the gas is carried through a column by a mobile phase, analysis of the graph of elution time versus detector response provides data on the concentration of substances in the gas.  Environmental chemists utilize gas chromatography when determining pollution levels in air samples to determine air quality in metropolitan areas (Harris).