Chromatography is a method used to separate and analyze complex mixtures, mainly liquid samples such as rainwater, river water, or other liquids that contain a matrix of many ions.  Ions separate differently depending on the species type, size, and charge.  The unknown ions in the sample can be simple anions, cations, or structurally complex figures such as proteins and amino acids.  Proteins are separated based on the charges of their functional groups.  A mixture that is analyzed with chromatography can allows scientists to calculate the concentration of each species present.

According to Metrohm, a supplier of ion chromatography instruments,  “ion chromatography includes all rapid liquid chromatography separations of ions in columns coupled online with detection and quantification in a flow-through detector.”  Essentially, the machine has two columns, one for cation separation and one for anion separation.  Inside the columns is a charged resin, which attracts and bonds to ions until ions contained in the mobile phase replace them.  The mobile phase, or eluent, is run through the system until the ions each elute, or leave, from the stationary phase.

Ion chromatographs have the ability to measure concentrations of major anions, such as fluoride, chloride, nitrate, nitrite, and sulfate, and many cations such as lithium, sodium, ammonium, potassium, calcium, and magnesium in the parts-per-billion (ppb) range.  Many of the aforementioned ions could be useful for determining the quality of water in a watershed like the Olentangy River Watershed, which is the main focus of the REEL project.

The output data resulting from ion chromatography a graphs, similar to the example shown below, that graph elution time vs. amount of material present.  The elution time, or retention time, is the time it takes for the ions to leave the stationary phase and the height and area of the peaks tell scientists  the relative concentration of the ions present. 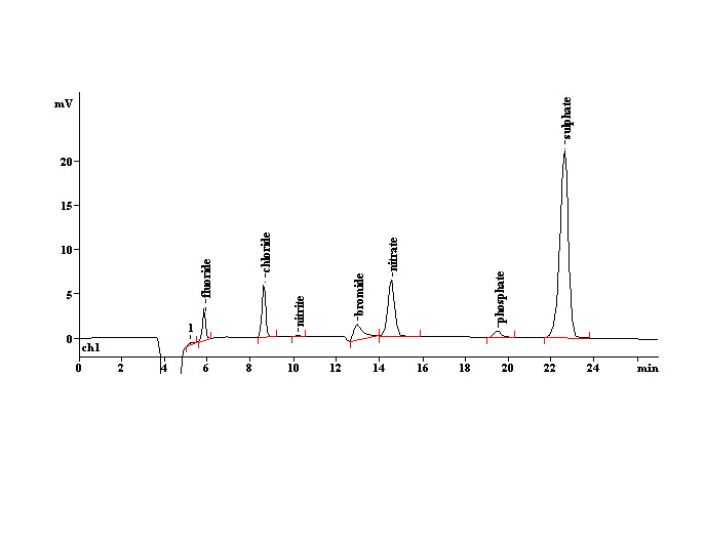 The ions are detected by measuring the conductivity of the solution.  Since it would prove extremely difficult to measure the analyte ions as they leave the column, due to the background conductivity created by the mobile phase, the mobile phase ions are selectively removed before the detector.  The mobile phase ions are convertyed into a neutral form or removed with a eluent suppressor.   Cations typically are analyzed using a mobile phase of HCl or nitric acid solutions while anions are analzyed with NaOH or sodium bircarbonate solutions.  Furthermore, according to Virginia Tech’s Chemistry Hypermedia Project, “For cation separation the cation-exchange resin is usually a sulfonic or carboxylic acid, and for anion separation the anion-exchange resin is usually a quaternary ammonium group.”

The main advantage of ion chromatography is that multiple ions can be analyzed at once since each ion elutes at a different rate.  Furthermore, the time it takes to analyze a sample is typically around ten minutes, making IC hard to top when it comes to efficiency.  Also, unlike instrumental approaches that may suffer from matrix interference, e.g. ion-selective electrodes, standard addition methods are not necessary.

Lopez-Ruiz, B. Advances in the Determination of Inorganic Anions by Ion Chromatography.  Journal of Chromatography A. 881 (2000) 607-627.