What started as a method in 1903 by Mikhail Tsvet to separate leaf pigments on a polar solid phase and to define this process carved a path to the discovery of the Ion Chromatography (IC). In the early 20th century, various chromatography processes have been on a constant revolution. What initially began as a Liquid Solid Chromatography (LSC) transitioned into High Performance Liquid Chromatography (HPLC), operating with packed columns with very small beads and under high pressures, eventually leading to the discovery of IC, in 1975 by H. Small, T.S. Stevens, and W.C. Bauman, which since has become a prominent analytical process. Although it may or may not be the most accurate analytical method, its benefits make it a very efficient one to record and analyze data. The theory behind ion chromatography may be found here.

The most significant benefit of ion chromatography is the speed and efficiency at which samples can be analyzed as it is generally used to analyze many ions in a sample at once. Before the IC process can be run, a number of preparations must be made in advance. First, water must be purified through a pressurized complex water purification system for ultra-purified water to create eluent solutions for each of the two columns of IC; typically, carbonate/bicarbonate buffer is used as an eluent for the anion column and methylsulfonic acid is used as an eluent for the cation column of the IC. Then analyte samples must be filtrated to rid excess solids as only liquids can be processed through the machine. A dilution step is added along with this filtration process as ion chromatography is optimized when the concentrations of the ions in analyte are as low as possible; the reasons will be discussed later. As a result, it is recommended that samples with relatively high concentration be diluted for IC analysis. In addition, few other precautions and further steps must also be taken before the actual analysis. If the analyte contains large molecules such as proteins, precipitation of these compounds is required beforehand for the actual IC analysis. Equilibrium of the sample must also be taken into account according to the pH, and one must make the pH adjustments to the solution if necessary. Most importantly, before the unknown samples can be analyzed, calibration curves from solutions with known concentrations of ions must be constructed to interpolate the amount of ions in solution.

IC is optimized at low concentrations and high pressures as the lower concentrations of ions allow for quicker analysis of the analyte and high pressures allow the cellulose beads in the columns to get close together, affecting the flow of ions in the columns, and as a result, allowing for larger separation between the relative rates of ions. Once the samples with known concentrations and unknown concentrations are prepared, the machine is ready to be operated. First, the machine must be calibrated using the known-concentrated analyte solutions by measuring the conductivity of the ions versus time, in which the derived data will be used to calculate the concentration of the various ions in the unknown analyte solutions. This is done by running the solutions with certain concentration of ions through the machine and observing the time it takes the solution to flow through the column. After this step is complete, the analyte samples with the unknown concentrations of ions can be run through the machine. The eluent is injected or loaded into to its respective column of the machine. Then, the analyte is pumped through the graph by two oscillating pumps, which are made of sapphire to withstand the high pressure the machine is used, reaching upwards of 1700 psi, or about 115 atm. The analyte samples are introduced into the graph by an auto-sampler into the injector valve filled with the buffer aqueous solution. This specific part of IC is known as the mobile phase. The solutions are then pumped through the separator where ion-exchange occurs between the analyte sample and the eluent, and the ions are separated. The sample is eventually pumped into the suppressor column, where the real analysis of the machine takes place. The ions in the solution then travel through the column, normally filled with cellulose beads, in what is known as the stationary phase. Based on their size and charge, they flow through the beads at relative rates. To speed this flow, the eluent with the same charge (so no interactions would occur) is added to “push” the ions down the column, where its conductivity is measured. Larger spikes in conductivity correspond to higher concentration of ions in the solution. After the sample has passed through the column, it makes its way to the waste disposal. 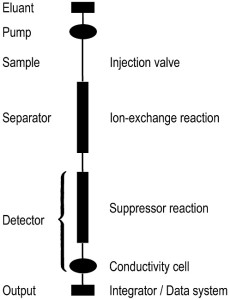 Ion chromatography is a great method of analysis, because it can analyze mass amounts of data in a short time. It can simultaneously analyze multiple ions in a solution, while observing their relative concentrations. Although other processes such as the standard addition method are more accurate, ion chromatography thrives as one of the fastest and accurate ways to analyze different samples to date.

Lopez-Ruiz, B. Journal of Chromatography A. Advances in the determination of inorganic anions by ion chromatography 2000. 881, 607-627.