Once an experiment is completed, the resultant data requires statistical analysis in order to interpret the results. There are statistical methods available that allow us to make judgments about the data, its relationship to other experimental data and ultimately its relationship with our hypothesis. These methods also allow us to determine the uncertainty (or error) in our measurements and results. The following are brief descriptions of these methods. 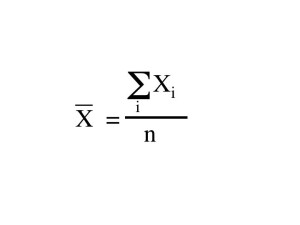 Calculation of the mean

The mean or average is the sum of the measured values divided by the number of measurements.

The standard deviation gives a measurement of the variance of the data to the mean. This value is used in almost all of the statistical tests and it is wise to calculate every time data is being analyzed. 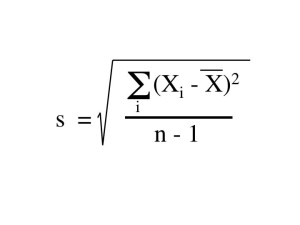 Standard deviation of the mean

A confidence interval is an estimated range in which measurements correspond to the given percentile. For example, a 95% confidence interval means that the 95% of the measured values will be within the estimated range. It can also tell precision and stability of the measurements from the uncertainty.
μinterval =  ± t*s / √N
μ = true value
= estimated mean
s = estimated standard deviation
N = number of data points
t = student’s t
N-1 = degrees of freedom

The t-test is a convenient way of comparing the mean one set of measurements with another to determine whether or not they are the “same” (statistically). Its main goal is to test the null hypothesis of the experiment. There are assumptions about the data that must be made before being completed. Once the t value is calculated, it is then compared to a corresponding t value in a t-table.  The value in the table is chosen based on the desired confidence level.  The higher the % confidence level, the more precise the answers in the data sets will have to be. A 95% confidence level test is generally used.

If the calculated t value is greater than the  tabulated t value the two results are considered different. However, one must be cautious when using the t-test since different scenarios require different calculations of the t-value. Three examples can be found in the textbook titled “Quantitative Chemical Analysis” by Daniel Harris. The examples are titled “Comparing a Measured Result with a ‘Known’ Value”, “Comparing Replicate Measurements” and “Paired t test for Comparing Individual Differences”.

As the t-test describes whether two numbers, or means, are significantly different from each other, the f-test describes whether two standard deviations are significantly different from each other. The difference between the standard deviations may seem like an abstract idea to grasp. This, however, can be thought of a way to test if the deviation between two values places them as equal.
In order to perform the F test, the quotient of the standard deviations squared is compared to a table value.  When entering the S1 and S2 into the equation, S1 is always the larger number. 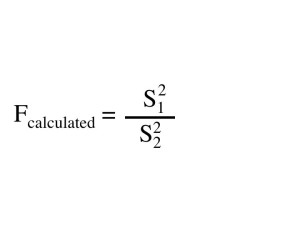 The Q test is designed to evaluate whether a questionable data point should be retained or discarded. In general, this test can be thought of as a comparison of the difference between the questionable number and the closest value in the set to the range of all numbers. The calculated Q value is the quotient of gap between the value in question and the range from the smallest number to the largest (Qcalculated = gap/range).

This calculated Q value is then compared to a Q value in the table. This table is sorted by the number of observations and each table is based on the percent confidence level chosen.