Algal blooms are a concern for water containing high concentrations of ions, specifically phosphate and nitrate1.  Algae feed on these ions and enables dramatic population increases.  However, algae have a short life span and their decay feeds on oxygen.  When an abnormally high amount of algae bloom and then die, they deplete dissolved oxygen in 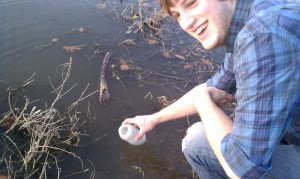 the water leaving aquatic organisms threatened.  An increased supply of organic matter in an ecosystem is a process called eutrophication2.  According to Anderson, eutrophication caused by increases in ionic content in bodies of water can be attributed to a variety of sources including sewage, usage of fertilizer, and animal waste1.  Bodies of water continually affected by these sources could produce algal blooms which threaten aquatic organisms dependent on oxygen in the water.

The Olentangy River is home to four special interest, threatened, or endangered species of fish. In the lower Olentangy River alone, there are 48 species of fish, 19 of which are pollution intolerant3. The possibility of algal blooms is a threat to an aquatic environment that habitats a diverse and unique population. 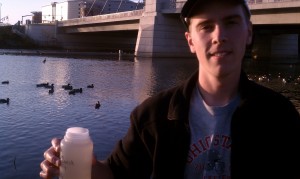 A study of the ionic character of the Olentangy River was performed in the area between 5th Avenue (south) and Lane Avenue (north). This site contains two sanitary-sewer overflow and three combined-sewer overflow discharge locations. These sewer-overflows release untreated waste into the Olentangy River when heavy rainfall overflows the sewage drains4. It is suspected that there is an increased concentration of nitrates and phosphates in the Olentangy River due to the activity of the CSO and SSO locations. This presence could be adversely affecting the aquatic life in the area by increasing phosphates and nitrates which have been attributed to the formation of algal blooms. 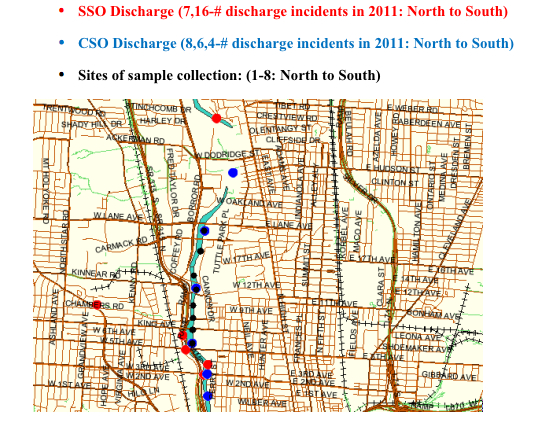 Samples were collected in 500-ml plastic bottles. These bottles were rinsed with the river water several times before the sample was taken. All samples were filtered before analysis. 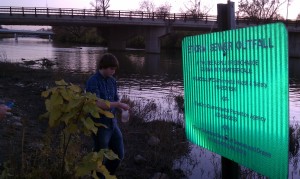 Water samples had their pH and buffer capacity measured. Analysis of the ions present in the samples was accomplished using an ion chromatographer. The importance and procedure of these measurements is detailed on the REEL research page5. 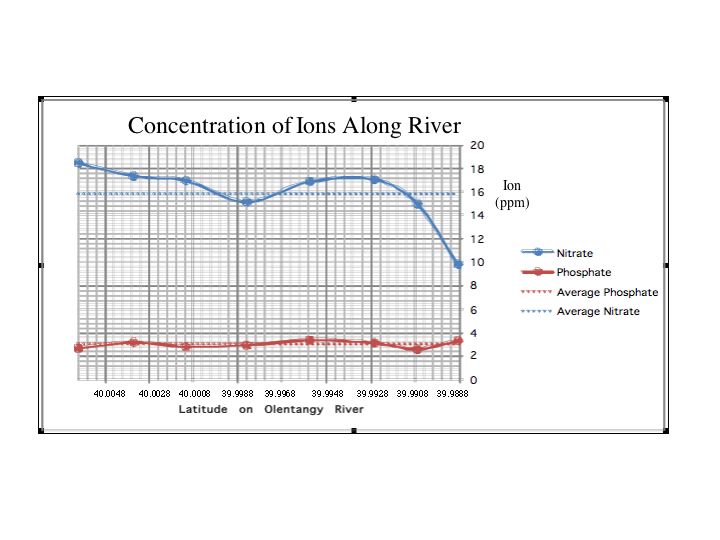 The pH of the river water is slightly basic. It is possible that this is a result of increased use of carbonic acid for photosynthesis from aquatic vegetation. However, these pH’s are in the range of healthy aquatic environments (6.5-9)7.

-To test for sameness in this group’s research, a statistical comparison was made between our data and a separate class data set for the same region (5th to Lane).

-To test for relative contamination of the 5th to Lane portion, a statistical comparison was made between our data set and the entirety of the Olentangy river data set.

-To test for changes in concentration over time, a statistical comparison was made between our data set and the data set from 2009 for the same region.

-To test for the affects of SSO/CSO, a statistical comparison was made between our data set and the data set of 5th to Fishinger. There is a confluent river to the Olentangy in between 5th Avenue (south) and Fishinger Road (north). This river contains no CSO/SSO discharge locations. However, this river lies approximately 3 miles west of the studied portion of the Olentangy. The CSO/SSO locations become the independent variable between the rivers. Therefore, the hypothesis can be accurately tested.

Future research includes identifying major pollutants within the Olentangy, monitoring the oxygen levels with the use of a Clark polarographic electrode, and attempting to introduce methods to reduce the amount of nitrate and phosphate in the river. Such future research would not only benefit the water quality and river ecosystem but would benefit the Columbus community as well.