David grew up near Philadelphia, PA as the eldest of four siblings in an Egyptian family with a strong love for teaching and education. In 2006, he earned a B.S. in Chemistry at Boston College, where he was awarded the university’s Scholar of the College prize for his thesis work with Prof. Scott Miller. During this period, he developed small peptide catalysts that serve as synthetically-controllable enzyme-mimics to desymmetrize meso-diols. In 2011, he earned his Ph.D. with Prof. David MacMillan at Princeton University, developing several new trifluoromethylation reactions by pioneering catalytic strategies for the mild generation of CF3 radicals. During his graduate studies, David developed the first catalytic, enantioselective trifluoromethylation of carbonyls by combining organocatalytic activation with photoredox catalysis. He further developed this radical-based strategy to enable the streamlined synthesis of medicinally-important aryl and heteroaryl organofluorines with numerous applications towards the late-stage C-H functionalization of medicinal agents such as lipitor and ibuprofen. As a Ruth L. Kirschstein NIH Postdoctoral Scholar with Prof. F. Dean Toste at the University of California, Berkeley, David continued developing new C-H activation strategies by harnessing selective, oxidative gold mechanisms and exploring their unique C-C and C-N bond-forming reactivity. In collaboration with Prof. Omar Yaghi, he also explored the catalytic utility of post-synthetically modified MOF (metal-organic framework) materials as size-specific heterogeneous catalyst architectures. In 2014, David joined the faculty of The Ohio State University as an assistant professor in the Department of Chemistry and Biochemistry. His team’s research on radical-mediated C-H and C-O functionalization has been recognized with awards by the ACS, NIH, NSF, and Sloan Foundation. When not working alongside his awesome labmates, David enjoys running along the Scioto River, checking out Columbus‘ vibrant foodie scene, and planning future world travels. 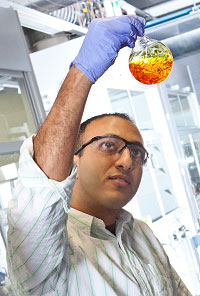