This project results from integration of projects I and II and consists of two areas of investigation. In the first area, monocyclic and bicyclic peptide libraries are designed to contain both target-binding and cell-penetrating moieties. Screening of these libraries result in macrocyclic peptide ligands that are cell-permeable and biologically active against intracellular proteins. We are especially interested in some of the most challenging (or currently “undruggable”) targets, such as those involved in intracellular PPIs. We have already discovered potent, specific, cell-permeable, and metabolically stable inhibitors against K-Ras (for anticancer therapy) [9,10], protein-tyrosine phosphatases 1B (for treatment of type II diabetes and cancer) [11] and TCPTP [12], calcineurin (inflammation and organ transplantation) [13], CAL PDZ domain (cystic fibrosis) [14], MDM2 (cancer), and NEMO (cancer and inflammation) [15,16] (Figure 7). In the second area, we are developing innovative strategies to deliver proteins, nucleic acids, and protein-nucleic acid complexes into the cell by using the cyclic CPPs. Previous biologic drugs (e.g., monoclonal antibodies) have transformed the drug industry over the past several decades, but are so far limited to targeting extracellular targets.

Current and future studies on this project include: 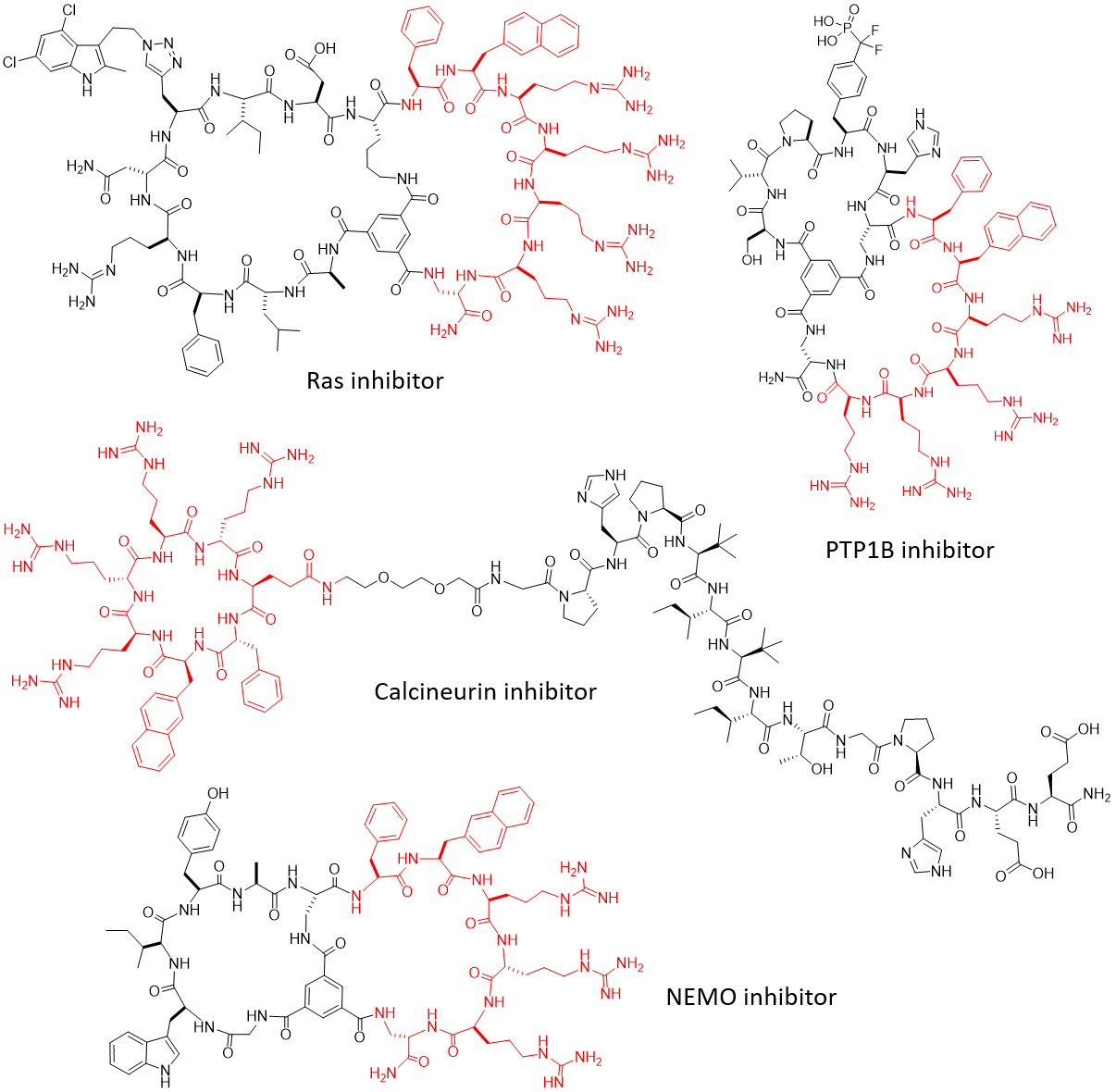 Macrocyclic peptides are capable of binding to flat protein surfaces such as the interfaces of protein–protein interactions with antibody-like affinity and specificity, but generally lack cell permeability in order to access intracellular targets. In this work, we designed and synthesized a large combinatorial library of cell-permeable bicyclic peptides, in which the first ring consisted of randomized peptide sequences for potential binding to a target of interest, while the second ring featured a family of different cell-penetrating motifs, for both cell penetration and target binding. The library was screened against the IκB kinase α/β (IKKα/β)-binding domain of NF-κB essential modulator (NEMO), resulting in the discovery of several cell-permeable bicyclic peptides, which inhibited the NEMO-IKKβ interaction with low μM IC50 values. Further optimization of one of the hits led to a relatively potent and cell-permeable NEMO inhibitor (IC50 = 1.0 μM), which selectively inhibited canonical NF-κB signaling in mammalian cells and the proliferation of cisplatin-resistant ovarian cancer cells. The inhibitor provides a useful tool for investigating the biological functions of NEMO/NF-κB and a potential lead for further development of a novel class of anti-inflammatory and anticancer drugs. 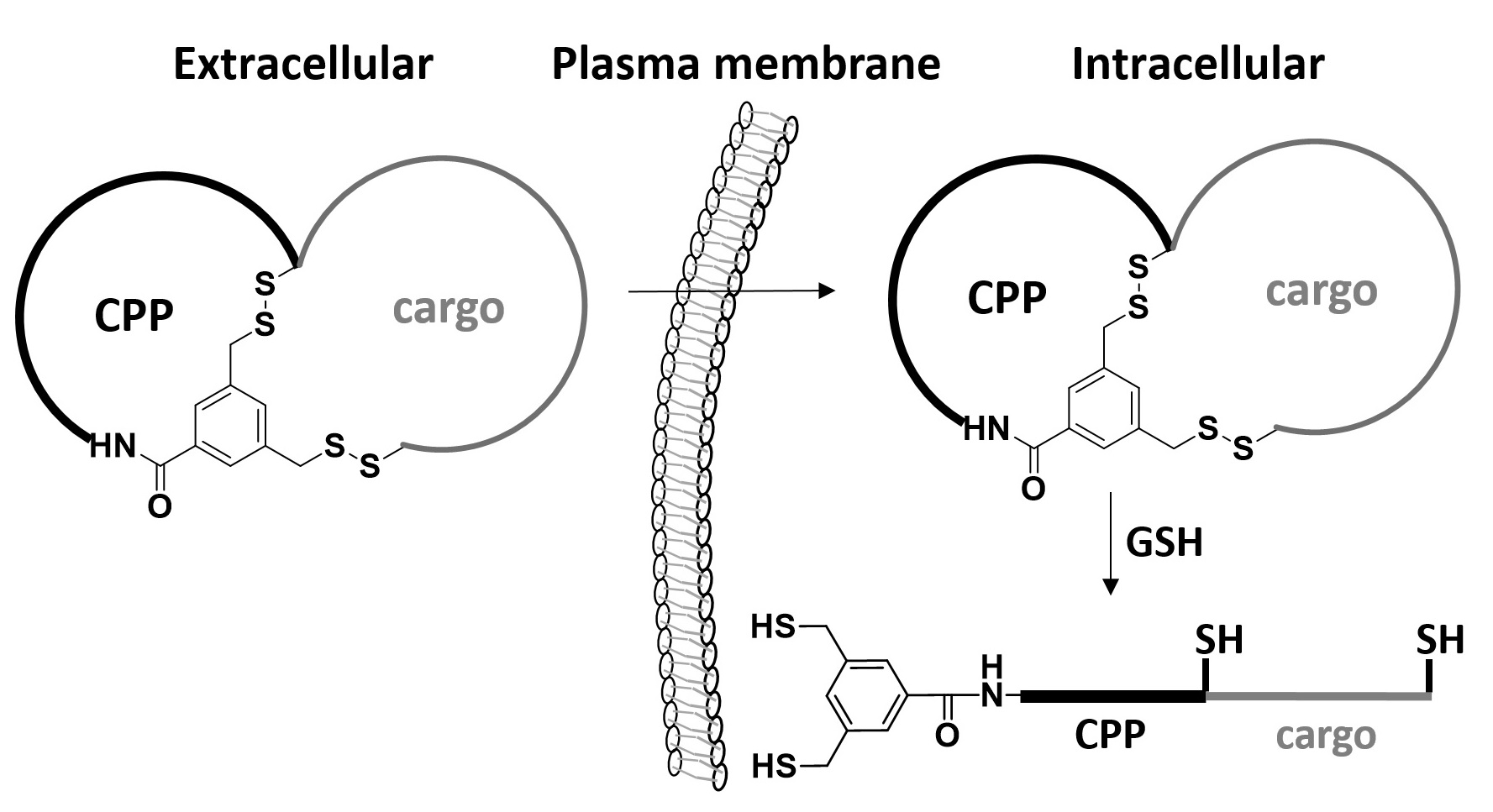 Therapeutic applications of peptides are currently limited by their proteolytic instability and impermeability to the cell membrane. A general, reversible bicyclization strategy is now reported to increase both the proteolytic stability and cell permeability of peptidyl drugs. A peptide drug is fused with a short cell-penetrating motif and converted into a conformationally constrained bicyclic structure through the formation of a pair of disulfide bonds. The resulting bicyclic peptide has greatly enhanced proteolytic stability as well as cell-permeability. Once inside the cell, the disulfide bonds are reduced to produce a linear, biologically active peptide. This strategy was applied to generate a cell-permeable bicyclic peptidyl inhibitor against the NEMO-IKK interaction. 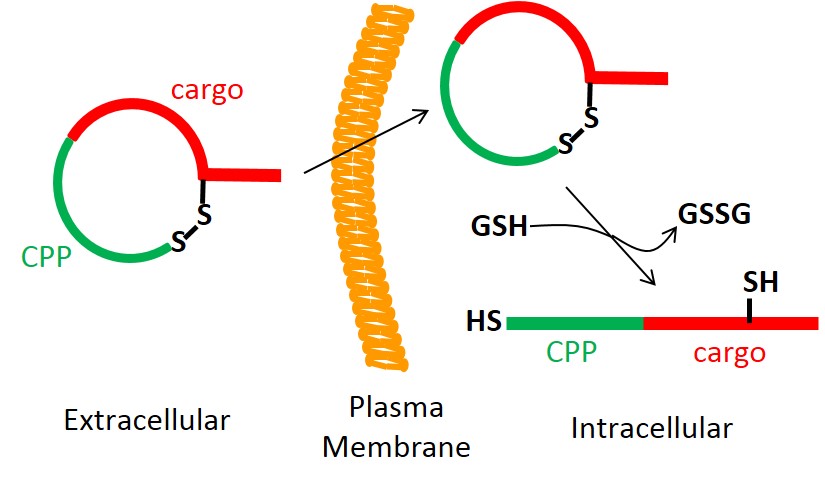 A general strategy was developed for the intracellular delivery of linear peptidyl ligands through fusion to a cell-penetrating peptide and cyclization of the fusion peptides via a disulfide bond. The resulting cyclic peptides are cell permeable and have improved proteolytic stability. Once inside the cell, the disulfide bond is reduced to produce linear biologically active peptides. This strategy was applied to generate a cell-permeable peptide substrate for real-time detection of intracellular caspase activities during apoptosis and an inhibitor for the CFTR-associated ligand (CAL) PDZ domain as a potential treatment for cystic fibrosis. 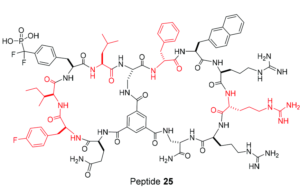 Protein tyrosine phosphatases (PTPs) have been challenging targets for inhibitor design, because all PTPs share a highly conserved active site structure, which is positively charged and requires negatively charged moieties for tight binding. In this study, we developed cell-permeable bicyclic peptidyl inhibitors against T-cell PTP (TCPTP), which feature a cell-penetrating motif in one ring and a target-binding sequence in the second ring.

Cyclic peptides have great potential as therapeutic agents and research tools but are generally impermeable to the cell membrane. Fusion of cyclic peptides with a cyclic cell-penetrating peptide produces bicyclic peptides that are cell-permeable and retain the ability to recognize specific intracellular targets. Application of this strategy to protein tyrosine phosphatase 1B and a peptidyl-prolyl cis−trans isomerase (Pin1) isomerase resulted in potent, selective, proteolytically stable, and biologically active inhibitors against the enzymes.

Cyclic peptides have great potential as therapeutic agents and research tools. However, their applications against intracellular targets have been limited, because cyclic peptides are generally impermeable to the cell membrane. It was previously shown that fusion of cyclic peptides with a cyclic cell-penetrating peptide resulted in cell-permeable bicyclic peptides that are proteolytically stable and biologically active in cellular assays. In this work, we tested the generality of the bicyclic approach by synthesizing a combinatorial library of 5.7 x 106 bicyclic peptides featuring a degenerate sequence in the first ring and an invariant cell-penetrating peptide in the second ring. Screening of the library against oncoprotein K-Ras G12V followed by hit optimization produced a moderately potent and cell-permeable K-Ras inhibitor, which physically blocks the Ras-effector interactions in vitro, inhibits the signaling events downstream of Ras in cancer cells, and induces apoptosis of the cancer cells. Our approach should be generally applicable to developing cell-permeable bicyclic peptide inhibitors against other intracellular proteins.

Ras genes are frequently activated in human cancers, but the mutant Ras proteins remain largely “undruggable” through the conventional small-molecule approach owing to the absence of any obvious binding pockets on their surfaces. By screening a combinatorial peptide library, followed by structure–activity relationship (SAR) analysis, we discovered a family of cyclic peptides possessing both Ras-binding and cell-penetrating properties. These cell-permeable cyclic peptides inhibit Ras signaling by binding to Ras-GTP and blocking its interaction with downstream proteins and they induce apoptosis of cancer cells. Our results demonstrate the feasibility of developing cyclic peptides for the inhibition of intracellular protein–protein interactions and of direct Ras inhibitors as a novel class of anticancer agents.