The Importance of pH in Fresh Water Aquatic Ecosystems

The balance of pH in ecosystems is essential to the well-being of all the organisms.   Generally pH affects the way in which an organism functions and, while it may be monitored in public drinking water, it is especially important in natural aquatic ecosystems since it affects the efficiency of enzymes to carry out their respective processes.  These processes play an integral role in the survival of a living organism.  Altering the delicate balance of the pH not only affects an individual organism, but all the organisms that are interconnected in an ecosystem.  The normal pH range for an aquatic freshwater ecosystem in general lies within 6.0-9.0 pH units [1].  In this tolerance the normal metabolic processes of individuals can occur. However, deviating from this pH range due to pollution can cause abnormal effects on the environment and its species.  Due to the importance of pH it is routinely reported when describing water quality.

A major contributor of increasing acidity in freshwater ecosystems is acid rain. Pollutants such as sulfur dioxide and nitrogen oxides (NOx) are 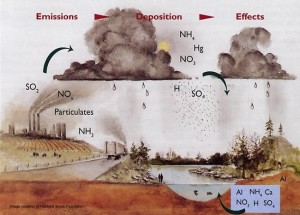 released from human sources such as automobile exhaust, factory smoke, and any other burning of fossil fuels [2].  These pollutants can form airborne acids (nitric and sulfuric acid) that dissolve in water vapor and make it acidic [2]. When this water vapor condenses into rain, it falls into rivers, lakes and streams introducing hydrogen ions thus decreasing the pH. This decreasing pH can lead to detrimental effects on the aquatic organisms.  For example fish can suffer from higher mortality rates, increased reproductive failure, and skeletal deformities; specifically for fish embryos the increased acidity will erode the epidermal cells which can cause death [3].

An imbalance in pH not only results from increasing acidity, but conversely 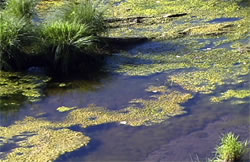 from increasing basicity.  Fertilizers are the main source of pollution that can contribute to this negative effect.  Common fertilizers contain ammonium nitrates and ammonium phosphates.  The ammonium contained in these fertilizers increases the concentration of ammonia in the water; concentrations of 0.2 – 2.0 ppm of ammonia are toxic to most freshwater fish species and can result in coma or death [4]. Fertilizers promote the growth of algal blooms and other aquatic vegetation. These plants use a large amount of carbon dioxide in the water for photosynthesis. This lack of carbon dioxide causes the plants to use carbonic acid and its conjugates for photosynthesis instead of carbon dioxide.  The use of carbonic acid for photosynthesis produces hydroxide ions which raise the pH of the water [5].

Carbonic acid plays a crucial role in the maintenance of a normalized pH in freshwater ecosystems, such as ponds, rivers, lakes, and streams.  It forms bicarbonate and carbonate ions which together act as a buffer.  The definition of a buffer is a weak acid and its conjugate base that resist change to pH when strong acids or bases are added. The bicarbonate/carbonate buffer is useful to freshwater ecosystems because it is easily formed when CO2 dissolves in water [5]. Although it is the main buffer, other buffers are present, which together contribute to the overall buffer capacity.  This is what helps maintain the integrity of the water’s pH so that a suitable living environment is ensured to the organisms which inhabit it.

Hydroxide Production due to Photosynthesis by Aquatic Plants

In order to test for the pH of a sample, a pH selective electrode was used.  Before testing, the pH electrode is calibrated with standardized 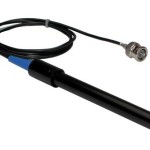 concentration of hydrogen ions of 4.0 and 7.0 pH units.  The pH electrode can then accurately measure the pH of a sample by measuring the gradient difference between hydrogen ions inside the electrode to the hydrogen ion in the sample being tested.