Investigation of CSOs and SSOs on the Olentangy River.

Introduction:  The Olentangy River runs through the heart of Columbus and is an integral part of the habitat of wildlife in Columbus. The city of Columbus has 62 CSO/SSO locations on the Olentangy River and its tributaries. CSOs are discharges of a combination of storm water and wastewater from the city’s older combined sewer system. SSOs are discharges of wastewater from the sanitary sewer system, typically during wet weather when flows may temporarily exceed capacity.3 The data of sewage discharge incidents from all 62 CSO/SSO sites along the Olentangy River and tributaries are summarized in the table below:

With so many sewage overflow locations along the river, there is a need to ensure that the concentration of harmful ions in the river is not increasing to a point that could be dangerous to the local environment.4 In addition to the river containing sewage overflow, it is also a destination for runoff water from agriculture. Our research will be limited to testing only those ions that are of concern for the overall health of the river and its wildlife. The ions that we propose to focus on are nitrates, nitrites, and phosphates. A comparison between present and past ion levels can be done to monitor the change in ion concentration over time. The goal of this research is to determine if there exists a correlation between the number of sewage discharge incidents and the concentrations of nitrates, nitrites, and phosphates in the Olentangy River. 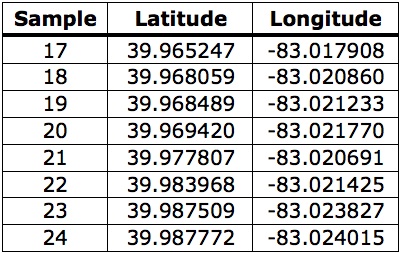 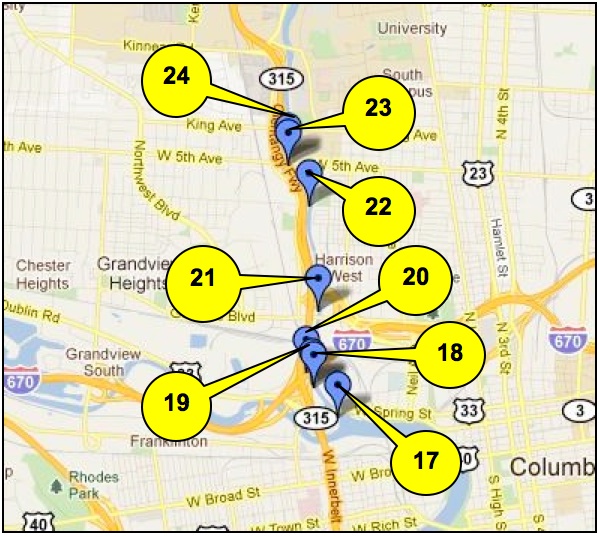 The samples were collected in plastic 500-mL Nalgene bottles that had been rinsed thrice with the river water from each location. The samples were first filtered before preparation of ion chromatography (IC) vials for analysis. 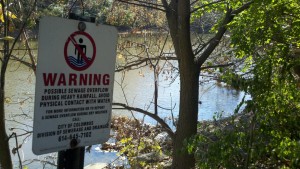 The data for sewage discharge incidents at SSO site number 2 are summarized in the table below:

Method Validation and Method of Analysis

The water samples from the river were analyzed for their ion concentration via ion chromatography. The unknown concentrations of nitrate, nitrite, and phosphate in the river samples were determined using the previously constructed calibration curves.

The phosphate, nitrate, and nitrite concentrations in our samples as determined by the standard calibration curves are presented in the table below: 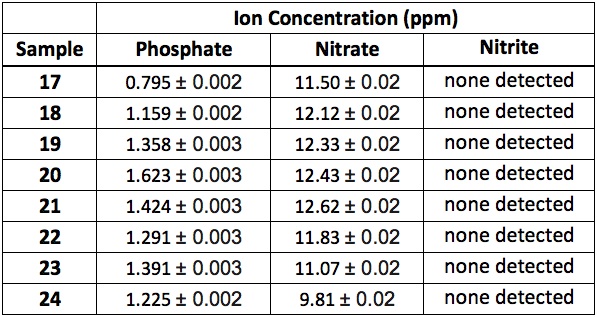 Statistical tests were used to determine if our data set is consistent with that of another group that collected water samples from the same locale. After Q-tests were performed on all sets of data, it was determined that no data points could be rejected at the 95% confidence level. F-tests and the Student’s t-test were then conducted to determine whether the data had statistically significant differences at the 95% confidence level. The average values provide the most useful piece of information to this research. When compared to the other set of samples from this year that were collected from Confluence Park to 5th Avenue, the nitrate concentration had a different distribution, but the same average value. The phosphate concentrations had the same distribution and the same average value. Because the average values were not statistically different for both nitrates and phosphates, it can be said that no extraneous human errors were made in the collection and analysis of the water samples.

Class data was used to determine average concentrations for the entire river for nitrates, nitrites, and phosphates.  Data from samples collected close to SSO or CSO locations were then analyzed, as well. This data is summarized in the table below: 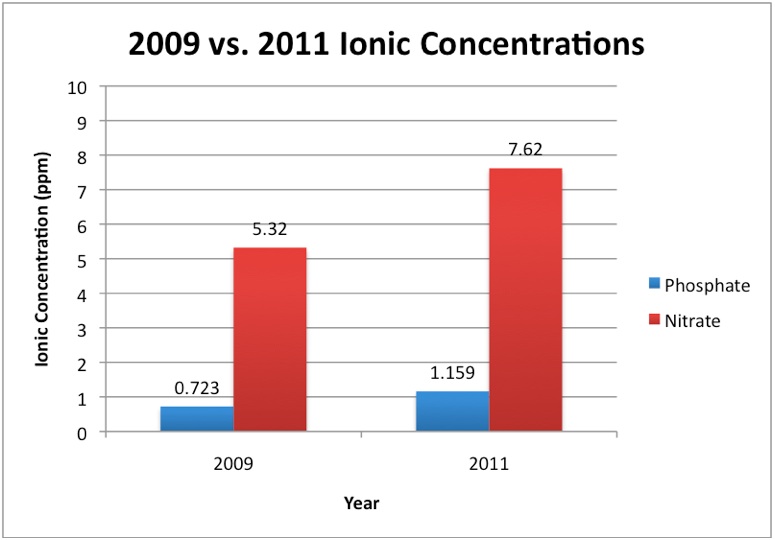 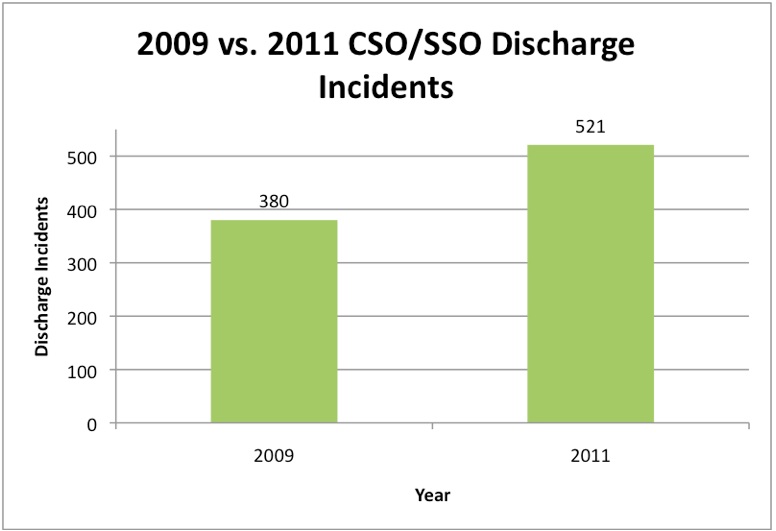 Further research would need to be conducted in order to build on the correlation found in our study and more accurately distinguish a cause of the increased concentrations. One possibility of further research would entail collecting data from the same locations every year to see if there remains a systematic increase in concentration levels because of ion accumulation over time, or if, indeed, there are lower ion concentration levels in the years with less discharge incidents. In addition to this, another study that can be conducted is to collect data from the same locations immediately after a discharge incident. This would help to determine if the concentration levels of nitrates and phosphates are actually due to sewage discharge, or if they are the result of another form of contamination. Another possible form of contamination is agricultural runoff, because nitrates and phosphates are also found in fertilizers. Overall, in order to expand upon the results we found and to determine causation, further research must be done.