Turkey run flows through a suburban area in Columbus, Ohio and Upper Arlington, Ohio and runs into the Olentangy. The creek originates around a commercial area (strip mall) from a large pipe, presumably a storm drain. Afterwards, it flows through residential areas of single-family homes. Midway through its course, Turkey run is dammed to form a small lake in the Ohio State University golf club. Afterwards, it flows through more residential areas before crossing underneath a railroad and flowing through and area of medical buildings near Riverside Methodist Hospital (a large medical center). It finally flows underneath Olentangy River Road, a main thoroughfare and State Route 315, a freeway, before joining the Olentangy River at River Mile 5.82. For the location of the Turkey Run, see the map courtesy of the Friends of the Lower Olentangy Watershed.

Golf courses aggressively maintain their grounds in an attempt to provide more desirable grass. This includes treating the grass with fertilizer, pesticides, and herbicides. Fertilizers provide calcium, potassium, magnesium, nitrogen, phosphorus, and sulfur and come in many chemical forms. The most common and inexpensive fertilizers are ionic compounds. Common anions include nitrate, phosphate, and sulfate. Common cations are ammonium, calcium, magnesium, potassium, and sodium. So-called organic fertilizers use naturally found organic molecules instead of inorganic salts. For example, amines may be used instead of ammonium nitrate to provide nitrogen. Fertilizers also often contain smaller amounts of boron, copper, manganese, and possibly molybdenum. Pesticides and herbicides tend to be larger organic molecules. An important exception is diatomaceous earth, which contains silicon dioxide and aluminum trioxide.

Fertilizers are applied by leaching into the soil. Inorganic fertilizers readily dissolve in the groundwater and flow downhill, collecting in streams and rivers. Excessive use of fertilizers is associated with algal blooms and eutrophication of lakes, seas, and ocean areas downstream. Eutrophication can become an ecological disaster when algal blooms consume most of the oxygen in a body of water, leaving a “dead zone” devoid of aquatic life.

Other than the presence of the golf course, Turkey Run flows through a relatively homogeneous neighborhood made up of single-family homes. It crosses under a railroad line and some major roads near its confluence with the Olentangy River. As a result, it is expected that the presence of the golf course will be the most important factor affecting ionic concentrations along the stream path. This research seeks to compare concentrations of ionic species in Turkey Run before and after the golf course and dam to determine if there are any potential effects of golf course lawn treatment. Additionally, the ionic concentrations in the Turkey Run will be compared to those of the nearby Olentangy River both upstream and downstream and with previous data collected in 2009.

This experiment has important implications for local environmental issues.  If there is a greater concentration of ammonium, nitrates, and other ions the resulting change in pH could have many adverse effects on the environment. Excess nitrates could contribute to eutrophication downstream. From animals that drink and live in the water, children who play in it, and the minor chance of contributing to acid rain, clean water is most definitely a concern. The Olentangy River is a state scenic river and attracts sportsmen of all kinds (fishing, canoeing, and camping), for whom water quality is very important. Without study of Turkey Run it is difficult to guess what effects it has on the environment.

Before performing this study, a series of experiments was performed for method validation. Samples containing known amounts of chloride and iodide were analyzed by a blind experimenter using potentiometric titration with AgNO3, ion-selective electrode (ISE), and ion chromatography (IC). The method validation concluded that ion chromatography was the most appropriate method of determining the concentration of ions due to its combination of relatively high precision and accuracy and its ease of use.

Eight samples were corrected at regular intervals along Turkey run on November 6, 2011. The locations of the samples are shown on the map (Map 2). Their geographic coordinates were determined using Google Maps and their known positions. To see photographs of sample collection sites, see photo gallery.

Samples were collected in 500mL bottles. The bottles were first filled and rinsed with water from the creek a few meters downstream of the collection site. Then, approximately 400mL of sample was collected in such a way as to minimize the amount of silt in the sample. At all points, Turkey Run was perceivably flowing and samples were easy to collect.

The samples were analyzed using Ion Chromatography (IC). IC, the high-performance equivalent of ion-exchange chromatography, separates analytes in a sample using their different affinities for a column containing charged functional groups. The IC system analyzes the sample to produce a chromatogram as well as identifying peaks and analyzing their relevant parameters (height, area, and variance).

Once the concentrations of analytes are calculated, the values before and after the OSU Golf Course were compared using a relevant t test. Additionally, the values from the entire Turkey run were compared to values from 2009, those for the overall 2011 Olentangy River, and to all river data collected in 2011. 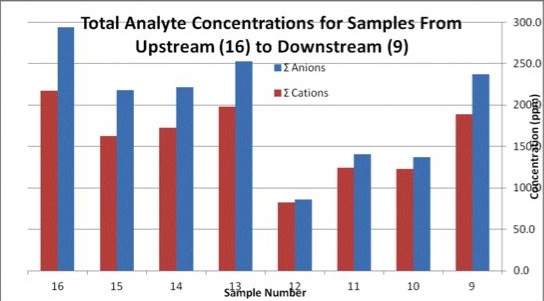 Ions Whose Concentrations Differ Before and After the OSU Golf Club 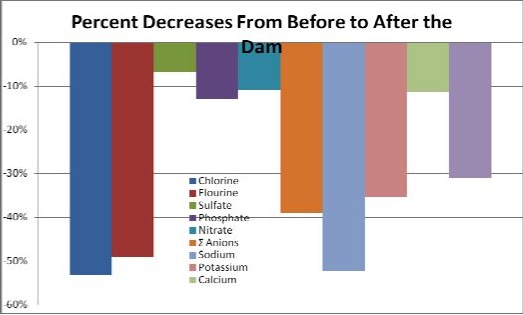 The data indicates a statistically significant decrease in total anion and cation concentrations from the golf course and further downstream. Average Turkey Run anion levels are elevated with respect to the Olentangy River levels while the cation levels are statistically the same. Additionally, the average anion and cation levels in Turkey Run are elevated with respect to the overall 2011 data set.  Finally, the comparison of 2011 to 2009 data (Turkey Run) yielded statistically equivalent total anion and cation concentrations, though nitrate, phosphate and potassium levels increased while calcium levels decreased with time.

The data contradicts the initial group hypothesis that runoff from golf course fertilizers would increase ion concentrations in the stream. The simplest explanation for the results is that the golf course treats its water. This conclusion is supported by the fact that the very lowest total ion levels were observed in the sample taken from the actual golf course (12, the change is fairly drastic). Thus golf course runoff does not pose a threat to the local ecosystem.

On the other hand, the data suggests that urban runoff contributes most significantly to ion concentrations. The pre-golf course samples’ ion content averaged much higher than post golf course samples’ did. The area Turkey Run traverses prior to the golf course is almost entirely urban, but passes through less and less housing areas once it passes Kenny Rd.

This runoff could be of concern, as the overall Turkey Run ionic content was higher than the average values from the total waterway data set.  The flow speed of the water could also contribute to the ionic strength of the water, as a slower flow rate gives more time for ion absorption from the soil.

In the grand scheme, the ion levels in Turkey Run in and of themselves are of no concern as of this study. All ions concentrations actually fall below the EPA standards for drinking water, let alone river water. Purification of this water could only involve removal of debris, bacteria and viruses without accounting for removal of the investigated ions. The lack of significant change from 2009 to 2011 indicates a stable ionic environment in the water with respect to time, so future problems seem unlikely as well.

In future studies of golf course effects on ions in water, four replicate samples should be taken right before the golf course and four other replicate samples should be taken right after it, as opposed to 8 samples distributed through the stream. Furthermore, accurate recording of sample collection date and time as well as weather conditions a week or so prior to sample collection would be useful references for making valid comparisons. Another interesting point of future study would be a comparison of ion levels in the urban portion of a stream or river against a more natural environment.